The Newport Beach Christmas Boat Parade and Ring of Lights

Join the spectators as you view beautifully decorated yachts, boats, kayaks and canoes cruise along the Newport Beach Harbor. It is truly a priviledge  The 108th Annual Newport Beach Christmas Boat Parade which is hosted by the Commodores Club of the Newport Beach Chamber of Commerce will begin on December 14 through December 18, 2016. This is an incredible event as the yachts are decorated with such detail, and there is so much to see. It is a Newport Beach annual tradition. #MyBoatParade. 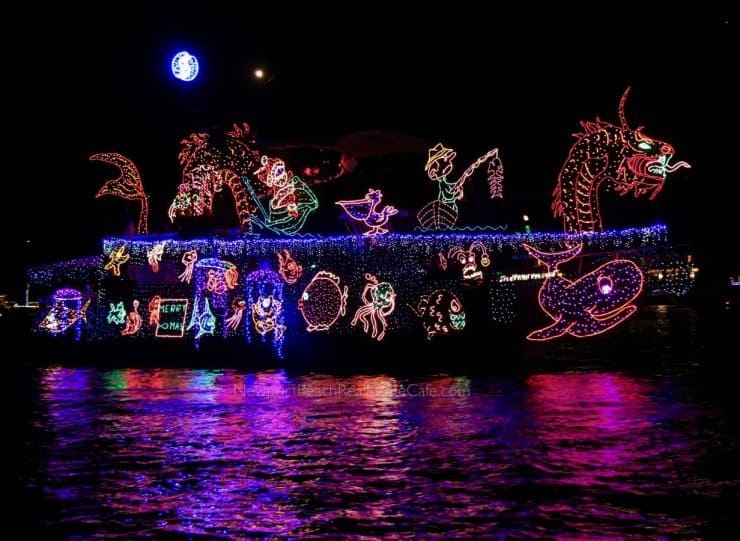 The parade starts at Bay Island at 6:30 pm and finishes at the same location at approximately 9:00 pm each night.  There will be a fireworks display on the opening night at approximately 6:30 pm. The schedule is as follows:

Opening night is on Wednesday, December 14, 2016
6:15pm Fireworks @ Newport Pier
Grand Marshal will be: Mickey Mouse, from the Disneyland® Resort

Thursday, Dec. 15, 2016 – Salute to Local Olympians: The official Grand Marshal boat will lead the parade with local USA Olympians who grew up in Southern California

The closing night will be on Sunday, December 18, 2016 at 9:00 pm, and enjoy a finale with fireworks at the Balboa Pier.

The route for the Newport Beach Parade of Lights and Christmas Boat parade is below.

The Ring of Lights

In addition to the Newport Harbor Christmas Boat Parade, many Newport Beach waterfront homes participate in the Ring of Lights which is very festive and truly lights up the Harbor.

If you are interested in watching the parade from a restaurant, then it would be wise to make reservations as soon as possible, as they fill up. Some suggested restaurant locations and locations include the following:

Hope to see you at the Newport Beach Christmas Boat Parade! Tag your photos with #MyBoatParade